Check out the works of Judith Rook right here.

Judith Rook was born and raised in rural Yorkshire in the UK. [Note the use of UK spelling herein. Ed] The nearest city was Bradford, the great centre for wool processing, but she remembers fields running up to moorland much more clearly than mill chimneys. 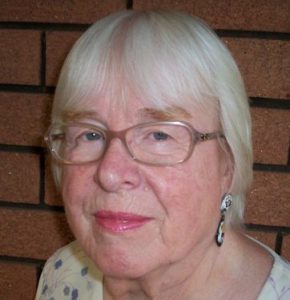 Judith’s early writing was done in old accountants’ ledgers which had blank sheets interleaved with the ruled pages. She wrote on the ruled pages as well. Not thinking of becoming a writer, Judith wrote whatever she felt like writing: stories, poems, reflections. Then life intervened and her imagination went underground. For some time, she worked in education and wrote articles and reviews about music.
After a few years, Judith began to write fiction. Recording ideas that had been bottled up for a long time, she thought that she had become an author. When rejection notices came in she joined two writing groups, developed her technical skills and learned how to write stories for other people.
Judith is an avid reader. Sci-fi is her favourite genre, then come the great classics, followed closely by fantasy. However, her taste is reasonably universal and perhaps one day she will try her hand at thrillers or crime stories. Judith greatly admires good crime writers.
As a young woman Judith emigrated to Western Australia where she lives now with a cat and a computer. From time to time she stirs herself to rally around important social issues and has been known to take to the streets in support, so long as there are good cafés along the way.
Periodically Judith turns to short stories. She finds that the challenges of short story writing refresh and strengthen the techniques which she uses in her novels.

Circe is one of the sentient planets in the system; she can think, and the humans who live with her are slightly different from the humans on other planets. However, they keep themselves to themselves and do not make contact with non-thinking planets. But now Circe is reaching out to First Home, the technological giant, the strongest world of the solar system, because she has sensed a great danger approaching from far off in the galaxy, and she is making plans to deal with it.
Tethyn must escort the envoy and his entourage on an expedition to her hidden family home where he will encounter the planet herself, see some of her powers and learn about her past. The envoy is deeply affected by the experience. During the excursion Tethyn admits to herself that she has come to love Lewis although in return she cannot hope for anything other than his desire. But desire is not enough, and when Lewis wants to take Tethyn to First Home, she refuses him.
Then personal danger for Lewis arrives. An enemy has followed him from First Home, and lives begin to alter.