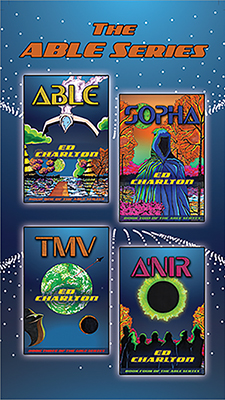 The ABLE SERIAL by Ed Charlton, is an ongoing sci-fi story featuring the all-too-human Jim Able. (Kindle Only)

Jim Able works in outer space. Although he has returned to duty after a disastrous encounter on a previous assignment, he is determined to enjoy his work. His boss may be on his case, but he still manages to drink a little too much, to eat dubious food, and to smell the alien flora.

In the first episode, ABLE, Jim is sent to Turcanis Major V to solve a mystery but with strict instructions not to start a war. Will he find the alien calling himself “Edward of Turcania”? Will he discover who has qualified for the First Contact fee? Will he accidentally foment a revolution?

With the help of a local female scientist, Madhar Nect, Jim investigates the religious minority of TMV’s main moon. He calls on all his patience, determination, and improvisation to finally secure an interview with a Regdenir. And then the trouble starts…

The story continues in the second episode, SOPHA.

As Sopha’s guest Jim finds himself drawn to the ceremonies and beliefs of this religious minority. He receives benefit from one of their rituals in regard to his troubled past.

When the deception concerning a forthcoming TV show is revealed, Jim’s relationship with Sopha is soured. His subsequent imprisonment followed by Madhar Nect’s military-backed rescue stand to disrupt the whole of TMV-II’s society.

In the previous episodes, ABLE and SOPHA, Jim investigated a mystery which led him to the religious minority of TMV’s main moon, a renegade Regdenir, imprisonment, and a military rescue.

Sopha the Regdenir has disappeared and Jim has returned to Earth. He soon learns that the Regdenir has armed himself with sophisticated weaponry. Jim returns to TMV in the company of an alien colleague, Tella. With the help of both Madhar Nect and Regdenir allies, Jim and Tella must work quickly to stop Sopha’s murderous plans.

The story continues in A’NIR.